If You Have a Dachshund 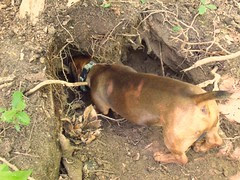 stump digging, a photo by Teckelcar on Flickr.
Then you're going to have holes.

A few weeks ago John would not come inside. It was pitch dark and way past my bed time. He had been outside for hours and I was getting a bit concerned. I tried my standard method to summon errant dogs, a very small handful of kibble being rattled in a steel food dish, but John never appeared.

So I pulled on my boots, grabbed a flashlight, a leash, and summoned Dell to come along with me into the woods. I wasn't sure if Dell could find John, but I figured it wouldn't hurt to have him along.

Turns out I was right about Dell.

He didn't find John, he was too happy to be bouncing around in the dark with me. However John came to us when he decided that Dell might be encroaching on his little project.

I turned out John had been industriously digging out a stump in pursuit of whatever creature had decided to make its den beneath the stump. The hole was quite impressive and it looked as though John was starting to break through the roots and into the den. I hate stopping a dog doing what it is bred to do, but I decided I had to haul him inside. If I left him outside it could get ugly when the trapped creature starts to defend itself. I was confident that John would win out, but I also knew that a trip to the vet would be likely. Particularly if it turned out to be a venemous snake. I really didn't want a $500 emergency vet bill (the after hours vet service charges roughly $200 when you walk in the door and from there it can only go up).

So my poor dog was leashed and forcibly dragged into the house.

The next day I decided to get a good look at John's handy work in the light of day. The stump was far less interesting to John. He gamely sniffed it out when I sent him in, but clearly last night's occupants had moved on.
Posted by Sarah at 11:59 PM