Artist of the week: Vase 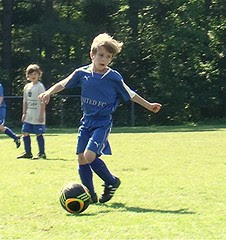 Max, a photo by Teckelcar on Flickr.
This week's artist is Max. Which was essentially his idea since he pretty much asked to be artist of the week.

I got so many great pictures of him during his last soccer game, so we have one more of him in action on the pitch. This spring Max had a terrific season. His coach put a great deal of effort into learning the game and developing interesting drills. It was nice having a coach that put as much in as Larry does when he is the coach.

And the extra effort paid off on the field. After a very rough start the kids learned about playing their positions, moving the ball in a controlled fashion, and passing the ball as they move up the field. No more mob ball, instead they were playing soccer. 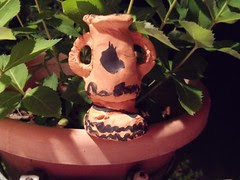 Max's vase, a photo by Teckelcar on Flickr.
As for this week's artist post, Max showed me this vase he made in art class. He wanted me to take a picture of his pitcher.He was very pleased with how it turned out and I think this was his way of asking me to share his creation.

I know they have been studying ancient Greece and the art teacher helps reenforce the lessons in the classroom with projects pertaining to the current study unit. My first thought upon seeing the vase was that it looks Etruscan. Which in turn was very similar in style with the then current Greek style of pottery.

I think it is a lovely little pinch pot that will be just right for some of the flowers Max picks for me.
Posted by Sarah at 11:56 PM