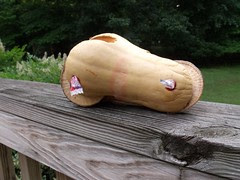 butternut racer, a photo by Teckelcar on Flickr.
When Jake was making his edible race car he started out with a butternut squash. It was heavy and carvable, a good candidate for the project.

I suggested that we cut into the bottom end of the squash and create two wheel wells. The narrower top would serve as the other end of the vehicle and have only one wheel. Hard candy sticks would act as the axles and rutabaga slices would be the wheels.

The final design was pretty cool. The vehicle had a very organic look to it. Sadly it did not roll very well. Forwards or backwards the wheels would rub and the vehicle would careen about. 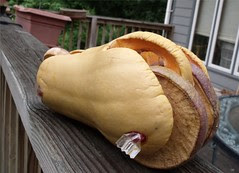 Rutabaga wheels, a photo by Teckelcar on Flickr.
Also we discovered that the candy sticks would melt after prolonged contact with the squash. There was just too much moisture in the squash and the sugar would start to dissolve, creating a sticky mes and a broken axle. So in the end Jake decided it was a dead end and moved onto his far more successful parsnip racer with cinnamon stick axles.
Posted by Sarah at 11:57 PM