On Thursday Jake had soccer practice, during which we got to experience all of the four elements.

He is the one in the middle with a white shirt.

With all the wet weather we have been having, a lot of his practices have been canceled. He was very happy that the rain had held off long enough for his team to finally have one. Practice starts at 5:30 pm and runs until at least 6:30 pm. Unfortunately this interferes with dinner preparations. As I have written before I try to start a casserole, but there are always a few last minute things that need to be done before dinner is served. Larry is a real trooper and he is able to meet me at the soccer field. He can’t come to the house, because he would have to leave work ridiculously early. It is a sort of tag team kind of deal. I bring the whole crew down to the field, he meets there at about 6:00, then I depart with all or most of the nonparticipating children (sometimes Nate stays behind) and finish up dinner prep.

Lately Max and/or Rebecca have been falling asleep while en route to practice. Anticipating this I have started bringing our wagon in the back of the van. I can use it to haul chairs, soccer gear and or children. This time both were fast asleep by the time I was parking the van. I wrestled the wagon out of the van and placed the raincoats on the bottom. The sky was threatening to rain and we would need them. I then carefully loaded the still sleeping toddlers on top. It was a tight fit. Good thing they like each other.

Slinging the gear bag over my shoulder we trekked out to the practice field. Along the way we experienced two of the four elements. The field was slightly mucky, giving us EARTH in the form of mud. Yet again a soccer ball ended up in a muddy ditch. This time it was a genuine accident so the boy in question would get to keep his ball, he just couldn’t carry it anymore. There was a damp wind blowing, heralding the impending rainstorm, hence AIR.
When we arrived at our part of the field I could see our friend the bucket loader had been joined by a bulldozer and there were two burning brush piles. This time I had brought my camera. 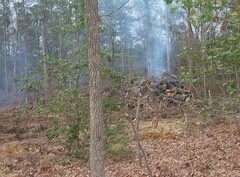 You can barely see the flame in the pile. It isn’t nearly as exciting as last time. The other brush pile was smoking, but was too far away to see actual flames. So now we have FIRE.

After about 20 minutes it started to rain. It was a gentle shower that went in fits and starts. Just after Larry showed up to relieve me of soccer duty the heavens opened up, giving us WATER.