It is disturbing to have the doorbell ring when you are stretched out on the sofa while resting your eyes. I get the added bonus of two overexcited three year olds bouncing about chanting “Doorbell, doorbell, go answer the doorbell!”

After rousing myself up and wadding through swirling children, I open the door to find a package by the door and a Fedex truck pulling away. Poo, it’s not even for me. I then went back to the kitchen and stared at the clock. It looked like I had 45 minutes before I had to go collect Jake and Nate from school for their dental appointment. Meanwhile Max and Rebecca were dancing about saying it was naptime. I went over to the foot of the stairs where they proudly showed me their little beds. They had been very industrious and had converted two little play tables into little beds. They even decorated them with stuffed animals for pillows. I grabbed this photo after they wrapped them selves with their blankies and lay down. 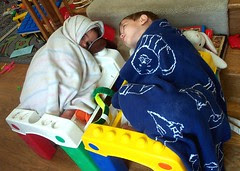 naptime
Originally uploaded by Teckelcar.
Too cute for words.

So I stretched out again on the sofa to rest a bit more.

Oh, oh it’s the school. Nate is very concerned and a little upset about how he is going to go home. He couldn’t remember if he was doing parent pick-up or not. His teacher sent him to the office to straighten things out. I told the office that I was going to be picking him up and that I sent a note to the teacher with him this morning. I could overhear the office staff asking Nate where the note was. He replied that he did not know. I helpfully added that it was in the front pocket of his backpack. When told this, he said he took out the note this morning and gave it to his teacher.

6 year olds are very literal. He didn’t know where the note is right now.

So the office staff sent him back to class. I then overheard her mutter about if there was a note why was he sent to the office. They were sorry to have bothered me.

Now I was wide awake and had to get the younger set ready to go pick up the boys.

Pick up went without a hitch. I chatted with the Nate’s team mom for t-ball and collected the boys. Nate beamed when he saw me and Jake gave a little wave. Nate gave me a note from his teacher, she apologized for the call. It seems she forgot to check her parent pick-up clipboard before sending Nate to the office. I didn’t mind if he was upset I’m glad he got to have a chance to have it all confirmed by phone in his presence. Kindergarten can be a bit overwhelming. Everything is new and this was the first time I was going to be picking him up from school.

The dentist was a mixed bag. Nate got a clean bill of dental health, but Jake has a cavity. It was not his fault. They could tell he was brushing his teeth; it’s just that his tooth formed with an oddball pocket. He was going to get a cavity no matter what. We get to go back in a few weeks and they’ll try to fill it.