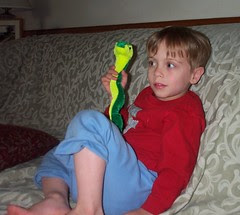 We survived just fine. As per the surgical nurse's suggestion Max got ice cream and cake before a delayed bedtime. Of course this meant everybody had to have some too. Fortunately we still had half of the cake left from Saturday's celebration. Only the canine family members got to enjoy Rally's bacon cheeseburger cake on Saturday. The human members of the family had to make do with a homemade orange cake with orange icing. It was excellent and I liked it even more with vanilla ice cream.

Max and Rebecca got a leisurely bath (gotta be clean for the Dr!) and were allowed to play much longer than usual. It was about an hour and a half passed their bedtime when they finally settled down. Max was having lots of fun opening the door and shouting out words like orange juice, waffle and so on. Each time he did this his older brothers would erupt with laughter.

As a result of those late night shenanigans Max and Rebecca slept in until 8:00. This was great for me and the boys. I was able to feed Jake and Nate breakfast without a hungry little brother mooning about. Once Max and Rebecca got downstairs I parked Max in front of the TV to watch a little Sesame Street while I discretely served Rebecca her breakfast. At 8:20 I dropped Nate off at the neighbor's house so he could ride the bus to school. Jake had already been taken in by Larry for "Science in the Morning". Then it was off to the Dr.'s. Max was very upset with the news and at first refused to leave the car. I convinced him in the end with a promise to go shopping for a toy afterwards.

I hauled in two bags of books and toys into the surgery center. They were all unnecessary. There was a fantastic pediatric waiting room filled with toys. The toys looked fairly clean and in working order, not the usual grubby broken down stuff in most medical offices. After a short wait we were escorted to another area. Max did not want to leave all the toys. I had to promise him that we would return to the playroom. In the new area we found even more toys. This place was beyond kid friendly. All of the staff and physicians we met were very kind and understanding of children. The worst part was when I walked him to the OR doors, I couldn't go in and he was taken away howling. Rebecca was concerned at first, but then she realized she had all the toys and her mother to herself. After about fifteen minutes they were done and Max was wheeled out.

When Nate had tubes put in his ears it was awful when he awoke from the anesthesia. He howled and cried and it took the longest time for him to register that his parents where with him. Max just quietly opened his eyes and looked around. The nurse scooped up his little body and placed him in my arms. He snuggled in and asked for his squeaky hedgehog. That was it. The nurses all said he was one of the quietest patients in waking up. What a little trooper. The only rough spot was when we left the building; he really wanted to go back to the playroom. So we did. He only lasted about ten minutes and then he wanted to go shopping for a toy.

So it was off to Target. There he got a little green stuffed snake and a hot wheel car. Rebecca, not to be left out, got a plush butterfly and a car. All four toys were purchased for the vast sum of $4.