Saturday was a very good day right from the start. We did not have to be anywhere before 11:30. Jake’s soccer game was at noon and Nate’s T-ball game was at 6:00 pm. No conflicts and a nice leisurely morning. I got to sleep in until 7:30. All four children were entertaining themselves. It was lovely. Guilt over the dogs finally got me out of bed. Being Saturday we had pancakes for breakfast. Afterwards Larry took off with Jake in tow to do errands. We would meet them at the soccer fields.

The one bumpy bit in the day was Nate. He was bound and determined to wear his T-ball uniform all day long. I told him he could suit up, but he could not play outside. He agreed and I went up to get dressed. When I came down I found him outside, the knees of his uniform already soiled. Argh! I called him in and verbally dressed him down. Then I sent him upstairs to change out of his uniform. I don’t mind my children getting grubby, it is their job. I just want to be able to show up to the game with a clean child, not a ball of dirt. Once Nate was dressed it was off to the soccer field.

We arrived at the field just as Jake’s team was finishing their warm up. Larry had saved us a spot by the field. We made camp and I gave Max and Rebecca their lunch. They were very excited to be picnicking at the soccer game. Nate disappeared with a soccer ball to play a pick-up game with the other players’ siblings. Jake’s team looked great and played well. The game was close even with the bizarre refereeing. The other team was clearly being favored. At one point a call was made and none of the parents could figure out what it was for. In the end Jake’s team lost by one point. We broke camp and schlepped home.

On the way home Max and Rebecca fell asleep in the car. When we got there I brought them inside one at a time. I placed them on separate sofas in the same room. An hour later we found them like this. 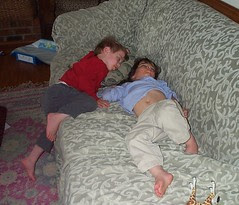 Max apparently roused himself enough to go over to his sister and lay down with her. As you can see he fell back asleep with one foot on the floor. There really is a special connection between twins.

Not long after naptime it was time to eat. Larry wanted to get out of the house by 5:15 for Nate’s 6:00 game. Nate needed to warm up and Larry had to be there early as he is one of the assistant coaches. The kids got a quick hot dog dinner, along with John the dog courtesy of Miss Rebecca. Nate and his father then went ahead and again I would bring up the rear with the rest when it was closer to game time. After a short playtime and a frantic hunting down of shoes and socks we were off.

At the baseball fields Jake met up with one of his classmates, M. She is the daughter of on one of team’s Moms. Max tagged along with them. With a smile I turned to M’s mom and pointed out that her daughter and Jake were wandering about together, but not to worry Max was their chaperone. I then settled in to watch the game. It was fun watching the game; the parents are encouraging and the kids, 6 and under, are all very cute. Periodically Jake would come over to complain about Max. He was chasing them about and pushing Jake. After about the fifth complaint I settled Max down in my lap and read a book to him. Twenty minutes later Jake was back and he wanted Max to chase them about again. Now it was fun to be chased by a three year old. We finished the book and Max tore off after his brother. I’m glad my kids all get along and can play together without too much drama. The T-ball game came to an end and we all headed home