Terry over at Possumblog posted the following :
I'll TELL you what it means!!
It means that today marks the FIRST ANNIVERSARY of the Axis of Weevil Thursday Three! In spite of all odds, in spite of an overwhelming lack of interest, this feature has survived the vicissitudes and vagaries of an ENTIRE 365 days, which is, like, a billion years in blog time, and it means that it’s time for something SPECIAL!
IN HONOR OF THE DAY, for today only, the Thursday 3 will be the THURSDAY 31,536,000! That’s right--a question for every second in every minute in every hour in every day of an entire year!
1) If there was one thing you could change about the way you look, what would it be? This one is easy, my stomach region. Pregnancy has not been kind to my middle region, giving me stretch marks and saggy skin. The twins were the finial straw. I have a photo somewhere that shows me sitting down with my belly exposed. It looks large a large white watermelon has been placed on my lap. The skin became horribly stretched and three years later it really hasn’t gone all the way back. The only reason I have a bellybutton is because last year I had an umbilical hernia repair. The surgeon was kind enough to reconstruct it. This of course is way too much information.

2) In your house, right now, what is your favorite piece of artwork that you have displayed? Hmm, this one is harder. Last night I was admiring a painting we had inherited from my husband’s Great Aunt Ann. It is of a scene in a park (NYC?) from 1930 by Bumpei Usui. In the foreground it has a lady walking a long haired dachshund. There are a few prints and photographs we have about the house and the requisite refrigerator museum of art, but my favorite I guess would be a painting by my father. 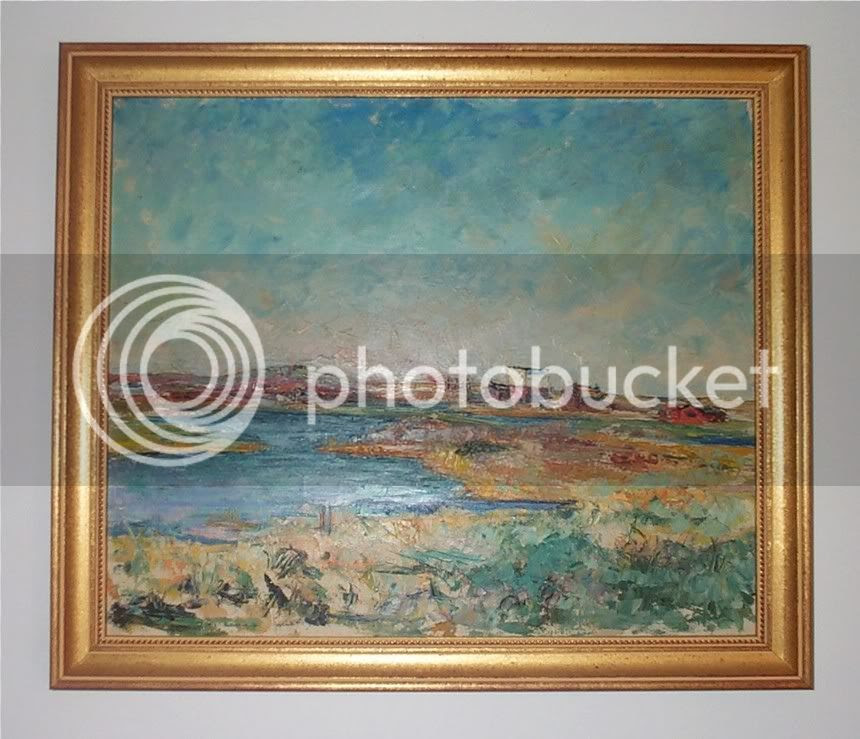 He was on a picnic with my mother and they decided to do some painting. My parents met at the Rhode Island School of Design. The only reason my parents ever met was because of the GI bill. He fought in WWII and was 11 years older than my mother.

3) What person living now would you most like to meet? Oh heck, I don’t know, The axis of weevil? I think I would like to meet Mookie Wilson. He was my favorite ball player. Not the flashiest guy, but a good solid player who seems to be a decent human being. I think he got the nickname from his grandmother. As a young boy he would got so excited over milk and cookies he would say “mookie.” A guy after my own heart.
Posted by Sarah at 10:33 AM