Art at the Farmers Market

Today was a busy day.

First order of business was the dump. I had to finish up cleaning the house and unload a whole mess of stinky garbage at the dump. A dear friend from college (Kathy) and her husband (Brian) are coming for a visit and I wanted the place to look and smell nice.

Once my smelly load was tipped into the dumpster, we were off to The 17th Street Farmers Market. I did not know when my houseguests would be arriving and time was of the essence. I laid the garbage can down in the rear of the van and dragged it up to the market. Normally I would return home to unload the garbage can, but today I just wanted to get going.

We arrived around a quarter to 11:00 and scored a legit parking spot directly opposite our grower. Woo Hoo! Last week we had to park a block and ½ south of the market. It wasn’t a bad walk, but it was much too hot to be traipsing about with four rather random and potentially cranky individuals (The heat seems to bring out their best. Not.). Once the crew was unloaded we made our way through the market.

Our first stop was the Brookview stand to pick up some yummy fresh eggs. They have the best eggs around and you can taste the difference. Sadly they were sold out. We had to settle with getting free cups of water and buying two bunches of basil. It is tomato season and you can never have too much basil.

As we worked our way through the market we stopped for a bit at the children’s activity area. We have gotten into the habit of stopping there each week. 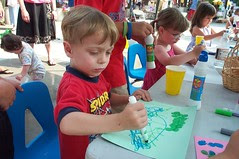 Here Max is generating some potential future blog fodder. As you can see he is serious about his art. Rebecca is on the far right, making her masterpiece in glue. It was a challenge to keep her from wiping off the glue on her hands onto her head. When they finished I herded them over to the bread guy and bought two fresh baguettes for dinner.

Since, surprise, surprise I was planning to do a little baking, I needed to get more eggs. I settled on going to these folks for my baking needs. They sell berries, eggs, a variety of meats (including ostrich!), and various ostrich items (eggs, leather and feathers). Their prices for chicken eggs are very reasonable and the eggs are fairly good. The stand was unmanned when we arrived and we stood there for a long time. I had just about given up when one of the owners reappeared.

At this point the crankiness level was starting to increase at an alarming rate. It was easily over 90 degrees outside and mutiny was on the horizon. I had to get my children out of there and back to our comfy, though slightly smelly, air conditioned car.

We rushed over to Amy’s and got our market share. Rebecca tugged at some flowers Amy was selling as I collected our veggies. As I moved to stop her from damaging the blossom Amy offered a few flower stems to the kids. Her cutting garden was particularly productive this past week and she could afford to be generous. It took a long time to sort out the flowers; Amy’s one request was we only take the bent flowers. After some delicate negotiations I was finally able to round them up and go to our (hopefully) last stand.

As we rounded the corner to Green Bean Guy’s I was happy to see the return of his corn. I asked it they wanted to have corn on the cob for lunch. All four thought it sounded like a great idea and they all cheered up. I grabbed eight ears of corn, paid up and left.

Kathy and Brian showed up just after we got home. We shucked all eight ears and we had a lovely pot of corn for lunch.