My dogs, like most dachshunds, are very destructive chewers. Here is an example of what Crunch can do to a toy in about 5 minutes of uninterrupted chewing. 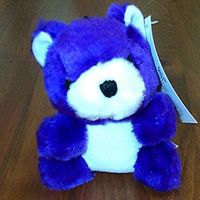 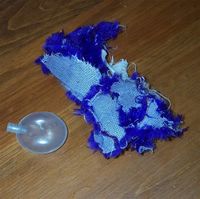 I particularly like how Crunch turned the toy inside out so as to completely eviscerate it. Not bad for a creature without opposable thumbs.

This and his penchant to killing all small furry creatures in our backyard have earned him the name “The Jaws of Death.” Fortunately Crunch is fairly well trained and limits his assaults to dog toys with some notable exceptions. Crunch is so obsessive about tennis balls we can not have them in the house. If he can reach the ball he will quickly rip it to shreds. This concerns me because his cousin Earl died from eating a piece of a tennis ball. If he can not reach the ball he will guard the area and snap at any other dog that comes near. He also views all squeaky toys as fair game.

Rally is a bit more esoteric in her tastes. She favors crayons and green plastic (although lately I have noticed she is starting to branch out to other colors). In her opinion crayons are particularly tasty. If she catches even the barest trace of crayon scent at her level she will hunt it down. Even an old empty crayon box is a treat. So far she has suffered no ill effects from her crayon noshing, just multi-colored stools that I call “clown poos.”

John, Crunch’s son, is not quite up to the same level as Crunch. After 15 minutes of chewing an identical toy its head was still full of stuffing. He is also not as well trained (he is still just a puppy) and wraps his mouth around any toy he can reach. I constantly warn Max and Rebecca not to bring toys downstairs or John will eat them. His title is “The Jaws of Destruction.” Luckily John has a soft mouth so I can usually retrieve toys before any damage is done, but there have been loses. At first I felt bad for Max and Rebecca and I would try to repair them. Now I just show them the toy and throw it out. It is an important lesson for them to learn. They need to understand that if they want to keep a toy they must take care of it.

Personal responsibility is an important thing to learn. They need to know that if they do not think through their actions and disaster follows they only have themselves to blame.
Posted by Sarah at 11:29 AM