In general my children get along very well. They like to play together and genuinely care for each other. 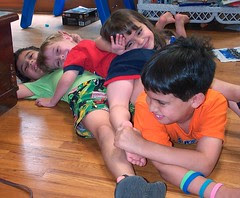 This was an impromptu puppy pile. We had just finished lunch and they were messing about and had just collapsed into a happy heap.

This weekend Meryl stopped by and got treated to the world’s slowest jousting match. Jake and Nate were on all fours pretending to be the horses with Max riding Nate and Rebecca riding Jake. Our young knights had paper bag helmets and pieces of bright red Hot Wheels’ track for lances. The horses would square off on opposite sides of the room; the knights would mount their steeds and then urge them forward. Jake and Nate would crawl forward as Max and Rebecca would hold out their lances. Half the time one or both of them would fall off before reaching their opponent. There was much giggling from all parties and it was very silly.

Mind you it isn’t all wine and roses. We also have our fair share of disagreements. Usually it is the normal back of the van complaints about one sibling annoying the other. My solution is to offer to pull over the van and park until they calm down. I refuse to be sucked in as a referee. I only intervene when I feel it is necessary, otherwise it is up to them to sort it all out. They need to learn how to get along and deal with difficult people.

Last Friday we had the great toothbrush disaster. I was on the phone with Meryl when Jake rushed up to me wailing about his toothbrush and Nate. NATE HAD TOUCHED JAKE’S TOOTHBRUSH WITH HIS FINGER. It was a truly horrible thing and HE NEEDED A NEW TOOTHBRUSH RIGHT NOW (my eldest is a wee bit dramatic and prone towards these kind of outbursts at full volume). Mind you this occurred after he had brushed his teeth. I staggered upstairs with my wailing banshee in tow to see what was going on. I had a spare brush head for his electric toothbrush if I thought it needed changing. (I have found that the kids do a much better job brushing with cheap electric toothbrushes. It is more exciting, or something)

When I got upstairs Larry poked his head out of the boys’ room and asked about the noise. I gave him a rundown and we both agreed it was one of the more idiotic complaints yet. I then went to the bathroom to survey the damage. Aside from the remnants of toothpaste, it was still just like new. I told Jake that he was overreacting and to just to knock it off. I then cleaned off his toothbrush in the sink under running water. From what I could tell Nate had been failing about, as 6 year olds are wont to do, and had accidentally brushed his hand against Jake’s toothbrush.

Fifteen minutes later the incident was forgotten. Good thing he hadn’t knocked it into the toilet.