Artist of the Week II

This week’s artist is Nate. Here he is with his “Water Lilies.” 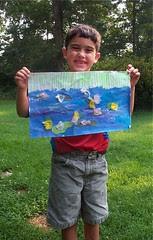 nate&art
Originally uploaded by Teckelcar.
And here is the artwork on its own:

waterlillies
Originally uploaded by Teckelcar.
This too was rescued from a backpack. It did not fare as well as Jake’s bamboo and is a bit tattered about the edges. This is not surprising; Nate is only 6 years old and is rather haphazard in how he crams things into his backpack. I’m lucky that he didn’t just wad it up before jamming it in.

Obviously Nate’s class was studying the works of Monet. It is hard to tell from the picture, but it is a multimedia extravaganza. The grass is crayon, the water is paint, the water lilies are construction paper and the flowers are tissue paper. This came home before the end of school and was on exhibit at The Dining Table Window Sills of Art Exhibition Space. The piece was a little large for The Refrigerator Museum of Art. I really enjoy looking at this piece as it is very peaceful and serene.

I have seen the originals at The Musée de l'Orangerie in Paris and got that same feeling of serenity. It is a little gem of a museum. Sadly it has been under renovation for quite some time, but should reopen next year. Larry and I had traveled to Paris while we were on Spring break during our junior year abroad in England. We were there for a brief stop to visit his Aunt before seeing a bit more of Europe and the USSR (we got to see the Soviet Union in 1986, before it all fell apart.) I would like to go to Paris and the museum again.

Here are some thoughts from the artist about the piece. The words are his, except the parenthetical addition from me.

“I liked making it and it took six weeks to make it (they only have art once a week). It is based on “Water lilies” and we were studying Claude Monet. And we watched a movie about Claude Monet’s garden in France and it is very, very beautiful. If you go there you will almost not believe how beautiful it is. I want to go there sometime.”