While chatting with Meryl last night I came to the realization that I cake blog. Well there are worse things out there. At least cakes taste good.

Today I’ll tell you all about Jake’s birthday cake. 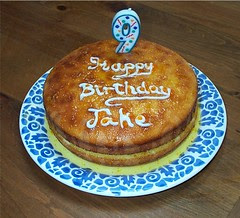 It is an orange cake that I found in my beloved 1946 edition of The Joy of Cooking. The lead off paragraph for the recipe is wonderful to read and I quote:

Most rules for orange cake prove to be disappointing, for upon reading them you find that they are merely sponge or butter cake with an orange filling. This one calls for orange juice in the batter plus orange icing. A gorgeous gilded lily presented without apologies.

Doesn’t that make you want to try this cake? Originally I was just skimming the cake section when that paragraph caught my eye. I then looked over the recipe and I had to agree that this one did indeed read well.

I then decided to see what my 1974 edition had to say about its orange cake. Right from the top there has been a change. No longer is it just orange cake, now it is orange-filled cake. I will now quote the lead paragraph:

Most rules for orange cake prove to be disappointing, for upon reading them you find that they are merely sponge or butter cake with an orange filling. This one calls for orange juice in the batter plus orange filling and icing (there is that filling again). Earrings for an elephant with no apologies!

Earrings for an elephant? What on earth does that mean?! Elephants are not something I associate with cake baking. The imagery of a gilded lily is far more appealing than a bejeweled pachyderm. I Googled the phrase and this is what I got. Not much out there. Fortunately the cake recipe itself had not been altered and without further ado, here it is.

Grate the rind into the sugar then add the butter and cream until fluffy. Beat in the eggs one at a time into the butter mixture. In a separate bowl sift the flour and resift with the salt and baking powder. Measure and combine the orange juice, water and lemon juice. Add the sifted ingredients in thirds to the butter mixture alternately with the liquid. Beat the batter until it is smooth after each addition. Bake the cake in two greased and floured 9 inch cake pans (I use spring forms) at 375 for about half an hour.

Then the two editions diverge. In the 1946 edition the cake is iced with orange icing. The icing itself really isn’t what I would call a traditional frosting. It’s more of an orange glaze. It’s composed of:

2 cups of sifted confectioner’s sugar
¼ cup orange juice less one tablespoon
1 tablespoon melted butter
1 tablespoon grated orange rind (about one orange)
1 tablespoon lemon juice
Mix all of the ingredients together in the top of a double boiler over hot water for ten minutes. Beat the icing until cool and spreadable. I spread it on top of the bottom layer, place the top layer on it, pour the remainder over the top of the cake and allow it to drip down the sides.

The 1974 edition has the following directions at the end.

When the cake is cool spread between the layers: Orange Cream Filling, page 647.

The orange cream filling is a complicated affair that one point directs you to make custard. At the very end of the filling recipe we are then told to ice the cake with Luscious Orange Icing, page 676. On page 676 there is another involved recipe.

The editors took a very nice recipe and turned it into a scavenger hunt. I’ll stick with my 1946 edition, thank you very much.

The cake I made on Thursday was very well received. This is how much was left after the boys were tucked into bed. 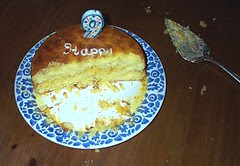 I like how the cake has just “Happy” left on it. It really is a happy cake.