Baseball on the Fourth

Today we went up to DC to watch the Mets play the Nationals.

It was our first time going to RFK Stadium, turns out it is a pretty nice ballpark.

The game was a 1:05 pm and we ended up leaving the house at around 10 am. It was a little bit later than we would have liked, but we got there in plenty of time. The drive up to DC was a breeze, a nice change from the usual slog. The HOV lanes were open going into DC which helped us out. We did not use them and it turned out that was a very good decision. At one point we saw an accident in the HOV lanes that completely blocked traffic. The regular lanes of traffic slowed down to rubberneck, but we motored on.

The directions we had gotten from the stadium’s website were not at all useful. Fortunately we knew where the stadium was located and were able to find it. The highway signs, for a change, were helpful and accurate. The stadium itself is located in a nothing area. There is a neat row of homes lined along the street opposite the stadium, but not much else, just a sea of asphalt and a Metro station. As we pulled into the lot I could see spent firecrackers littering the pavement. Looks like the fourth started a bit early here. Since we were early we could pretty much pick our spot in the parking lot. We settled on a spot not too far from the stadium and oriented towards a quick get away after the game. Then we all piled out of the car onto the hot pavement. As the kids fidgeted about I slathered sunscreen on them and myself. There was no way I was going to risk driving home with four cranky, sunburned kids. After a false start, (which was my fault, I couldn’t remember if I had put sunscreen on my face) we all trooped to the stadium.

Larry had bought the tickets months ago and the best seats left were way up on the upper deck. Here is the view from our seats: 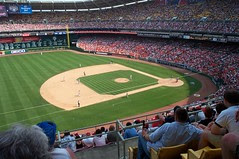 When we got to our seats I was a bit disappointed that we were in the sun. It was about 85 today, but it felt a lot hotter. I was very thankful that we all had on sunscreen and hats. We settled down in our seats and had our hotdogs and soda. At this point I have to vent about some rather stupid polices at RFK stadium. ALL of the food venders are strictly cash (this includes the permanent concession stands, not just the pushcarts) and the prices are absurd, four dollars for a bottle of water (after we bought two bottles I found a water fountain and refilled them) and five dollars for an ice cream. Oh, there are ATMs inside the stadium, but the line during most of the game was over 30 people long. My other beef was that when you buy your water they take the cap off and keep it. Why? What harm can I cause with a plastic bottle cap? This was particularly aggravating as I was carrying a sleeping Max on my shoulder(end of Vent). Anyhow, we were there to watch some baseball and to cheer the Mets on. It may be the Nationals’ stadium, but we were not by any stretch the only Mets fans. 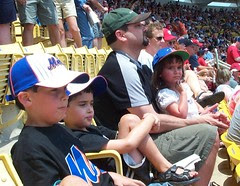 watching
Originally uploaded by Teckelcar.
As you can see Rebecca was less than thrilled with the heat (Max was parked on my lap). It was brutal under the bright sunshine. There was only a fitful breeze to relieve the heat. I brought Max and Rebecca down into the shade, but they wanted to see the game and be with their Daddy. I remember at one point thinking that maybe it was a mistake to drag them to a ball game in July. I know I was feeling a bit off. Meanwhile, Max insisted on sitting on my lap and soon dozed off. Rebecca too was feeling sleepy from the heat and she slipped off to dreamland while cradled in her father’s arms.

About halfway through the fifth inning the sun had moved and we were in the shade and we all perked up. At that point I really started to enjoy the game. When Max awoke from his nap I took him down to get some salty snacks (because of his CF he needs extra salt when he gets all hot and sweaty, he had a headache and I knew that salt and water would do the trick) and refill our water bottles. Back at the seats we passed around the water, popcorn and nacho chips. Everybody was having a very good time.

Shortly after we finished our snack the team mascot bustled through our section. We pointed out Screech the Eagle to Max and Rebecca when he went by us. Max was fascinated and wanted to meet Screech. When Max and I got up to follow, Rebecca tagged along with us. It took some hustling on our part, but we did catch up with Screech. Here is our photographic proof: 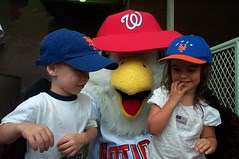 Larry pointed out later that Max and Rebecca are wearing hats for the opposing team. I thought that was pretty funny.

At the seventh inning the Mets tied the game and went on to score a couple more runs in the ninth. Once the Mets took the lead people started to clear out of the stadium. Something I never could understand. There was still half an inning to go and the losing team would be at bat. Why leave now?I agreed with the people behind us who said something to the effect that “you don’t leave until the fat lady sings” and they “didn’t hear any fat ladies singing.”

With the open row in front of us I started to take some more group pictures. A lady lower down noticed my antics and offered to take a picture of us so that I could be included in the photo. I thought that sounded like a good idea and handed the camera over. 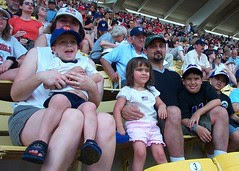 family
Originally uploaded by Teckelcar.
Of course Max had to sit on my lap so I’m not very visible in the picture.

At this point Max and Rebecca started getting a little silly. Larry then thought it would be nice if he took a picture of them with me. 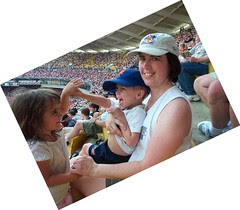 I think it came out well. I had to grab one of Rebecca’s hands and Max’s left arm as they were having a little mock battle on my lap.

Shortly after this picture was taken the Mets made the last out and won the game. We all cheered and made our way back to the car and homewards. We didn’t go see any fireworks displays, but we did have fun this fourth of July