Why Does She Do This? 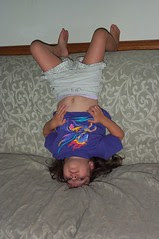 So here is a picture of Rebecca watching television. She isn’t always upside down, but it is a fairly normal thing for her to do.

What I want to know is why? Why of all my children does she do this? She does not like to be held upside down nor is she as rough and tumble as her three brothers. I would understand if any one of them would assume this position. But Rebecca, My little princess in training? She can be such a feminine creature, wearing dresses and playing with dolls.

I guess it just adds to the mystery that is Rebecca. She is opinionated, stubborn and able to hold her own with her siblings. As I have mentioned before, she has some of the world’s worst table manners. Nate (who sits directly across from her at the dinner table) is regularly disgusted by her behavior. She is prone to dramatic fits that border on the absurd. One time she was having a tantrum in the car, because I was GOING THE WRONG WAY. Mind you she was two at the time and had no idea where we were or where we were going. I turned the car left, when she said we should go right. Then the howling began. The funny part was that if the view out of her window interested her, the noise stopped. But when she tired of the view, her tantrum would return at full force. Meryl was with us at the time and both she and I thought it was hilarious how the Rebecca would stop and start right back up. My daughter, at times, can be a full blown drama queen.

She can also be very kind and generous. I have seen her share toys and treats without prompting. She will fetch things with out being asked. Her other favorite television viewing position is to be snuggled up to me on the couch. Being upside down is just another facet to Rebecca’s personality.