Artist of the Week: Pastels

Last summer there was an artist who had set up shop at the 17th Street Farmer Market. 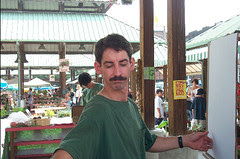 marketartist
Originally uploaded by Teckelcar. His name is James Poole and his work is fairly nice. The kids were intrigued by him, Jake in particular wanted to buy one of his works. As we stood there under the hot June sun he approached us and suggested that maybe we should sit for a quick portrait. I dithered for a moment, how could I great all four to stay still enough and what was I going to do with it once he was done? I then realized that a portrait of the five of us could be a nice birthday present for Larry. I could frame it and he could hang it up at work. That just left us with the problem of what to do with two squirmy three year olds. Mr. Poole then offered his chair for me to sit on with Max and Rebecca on my lap.

After I got settled in the chair with the small ones, Jake and Nate flanked me on both sides. The artist then set to work. Jake and Nate were perfect. In fact at one point we told Jake he could loosen up a little, he did not have to be absolutely still. Max and Rebecca, on the other hand, only remained on my lap due to my firm grip on them. Here is the finished work: 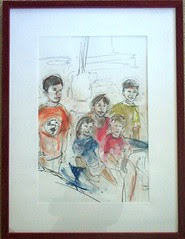 portrait
Originally uploaded by Teckelcar. I like it. It is not an exact representation of us, but it does work. I like pastels and I think they are a very fun and forgiving media to work with. Coupled with a good pencil you can do a lot with them.

Since Larry’s birthday wasn’t until the third of December; I had this parked on an upper shelf of my closet. Unfortunately I still missed giving this to Larry on his birthday. I was stuck in the hospital with Max that day. As a result it wasn’t presented to Larry until the following Monday, the 5th. So much for planning ahead and being organized! Hopefully next year Larry’s birthday will be a little less eventful and I’ll be able to write about him.
Posted by Sarah at 11:31 AM