Doom at the Bus Stop

There are a fair number of vultures about our subdivision. You can see them wheeling about in the thermals overhead. I accept the fact that I live in their environment. We live near a very well forested state park and the houses were built with the minimum of tree removal.

Never the less it is a bit disturbing to see this 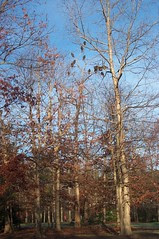 vulturesfar
Originally uploaded by Teckelcar. as you escort your children to the bus stop one brisk morning.

There were at least a dozen vultures in a dead tree not a stone’s throw from the bus stop. Here is a better shot of the birds.

I like how one of them has spread its wings to catch the feeble warmth of the early morning sun.

They only congregate on cool mornings with bright sunshine. The most unsettling location that they select is the roofline of some poor soul’s home. Imagine pulling out of the garage and seeing a dozen or more very large and very black birds that are commonly associated with death, arrayed on top of your home. What a nice way to start your commute to work. And yes, I have seen it a couple of times. Thankfully it has not been my home, but I can imagine the sound of them clumping about on the roof.