Hey! Its My Birthday!

Unfortunately the day have a very rough start with a dash to the ER in the wee hours. Max awoke at 10:30 with stomach pains. A few torturous hours later I called Dr. Elliot and he told me to bring him in. Just as I was putting Max’s socks on he urked, after which he felt much better. I still took him in as we were expected and I wanted to be sure he was alright. After only 2 1/5 hours (a record in my books), an x-ray and a blood draw we were sent home. We decided that maybe having pot roast for dinner was a bit too rich for his now tender digestive system. But enough about that.

Today it’s all about me.

40 years ago today my Mom and Dad became parents. 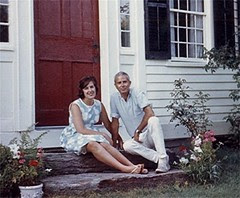 SarahMom&Dad
Originally uploaded by Teckelcar. They were way ahead of their time. My Mom was 36 and my Dad was 47. Nobody was having kids for the first time at their ages. Today it is downright commonplace.

This is a picture of me as a wee babe. 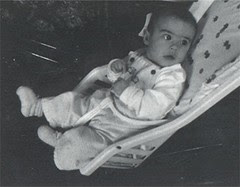 BabySarah
Originally uploaded by Teckelcar. I was a tiny little baby, all arms and legs. When a family friend came to the hospital to see for the first time he exclaimed over what a nice big baby I was. My father realized that he was admiring the nice Polish boy next to me and told the friend that I was the spider monkey in the next basinet.

Because I was born on “...a date which will live in infamy” (Go to Terry to get a neat rundown on Pearl Harbor Day) I was almost named Pearl. Fortunately my parents decided to express their sense of humor in a more subtle way with my name. My middle initial is B. which when coupled with the surname Straight has led to a fair amount of disbelief about my name. Though I must say nobody ever refused my checks.

I have also been very aware of Pearl Harbor all through my life. I was annoyed when Dan Quail got it wrong, but I viewed him as fool and moved on. But when Bush the elder got it wrong when he was supporting his vice president, I never forgave him. He fought in WW II, he knew better.

So it is an interesting day to celebrate my birth. In a way it is fitting. If it had not been for WWII my parents never would have met and I would not be here today.
Posted by Sarah at 12:24 PM