Deck the Halls and Ring Those Bells

Today I got to see Jake and the rest of the fourth grade perform at the Landmark Theater in . Originally commissioned and built for the Shriners in 1926, it was bought by the city in 1940. Recently restored to its former glory it has become a popular venue for all sorts of events. 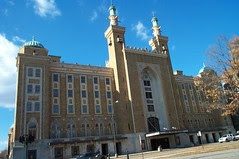 
This site has even more exterior shots of this decidedly unique building in .

I love all of the gaudy mosaics on the inside of the building. This is what first greets you when you step in the doors
. 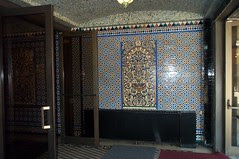 enter
Originally uploaded by Teckelcar.
The lobby continues with the same theme 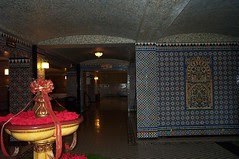 My only complaint about the lobby is the very low ceiling. When you step into such a large and grand building, it is a bit of a let down to be fed into such a cramped tunnel like area.

The theater itself is much more to scale with the exterior. It has a wonderful vaulted ceiling with a four panel mural featuring camels and pyramids above the stage. Unfortunately the light was too dim for me to take any decent pictures of the inside. But I did get this shot of Jake waving to me from his seat. 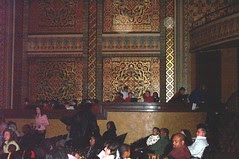 
Here is Jake again in a closer shot. He is in the box seats waiting for his turn to perform. 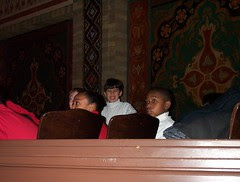 
The Ballet Petit was doing it annual production of “The Night Before Christmas.” Between acts of the morning matinee the fourth grade would be performing various Christmas carols on hand chimes, Jake’s group played “Deck the Halls.” performance
Originally uploaded by Teckelcar.
They did a very good job with everybody keeping pace. The acoustics are outstanding in the Landmark and I could easily hear them. I had to creep up to the orchestra pit to get this picture. I wish it had been a little sharper, but it’s not bad considering that my camera is a fairly ancient digital that is held together with string.

Max and Rebecca enjoyed seeing Jake, but were bored half the time. Ballet and four year olds only work in short doses. They did perk up when the dancers were costumed as reindeer and forest creatures, but otherwise they wanted to go home.

Here is Jake afterwards with some of his classmates. 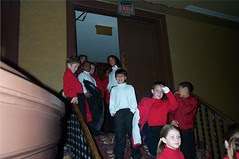 sidedoor
Originally uploaded by Teckelcar.Once the whole shebang was over the fourth grade was invited backstage to see the sets and meet the troupe. Jake had a great time and was eager to perform again.
Posted by Sarah at 5:01 PM