Last night was the first night of Hanukkah. My Mom has a menorah at her house that was given to us by Larry’s paternal Grandmother. We found a nice spot in the front room, lit the candles and recited the blessings. 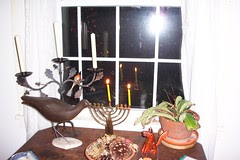 000_0011
Originally uploaded by Teckelcar.
I’ll try to do another update tonight after we light the candles again.

The funny part is that the menorah shares the room with my mother’s Christmas tree. This year she has decided to get a pre lit artificial tree. At the age of 76 my mom has decided that she no longer has the energy or where withal to deal with a real tree. She now lives in town so she has the added burden of disposing of the dried out husk. No longer can she just toss it into the swamp. I miss smell of a real tree, but not the mess and bother.

After she set it up she then decided that she no longer wanted to deal with hauling ornaments up out of the basement. The stairs are treacherous and the boxes are awkward. I suggested that the kids could decorate the tree. I bought paper, scissors, glue and a craft kit. The kids had a wonderful time making things and putting them on the tree. 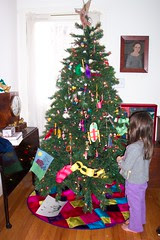 000_0001
Originally uploaded by Teckelcar.
I think it turned out quite well. We ended up making them on Christmas Eve and think it is a nice little tradition that we may have started.
Posted by Sarah at 12:06 PM