Artist of the Week: Clay 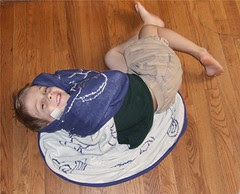 spinMax
Originally uploaded by Teckelcar. Here he is, spinning on the floor wrapped in his blankie. It looks pretty clean for now, but that won’t last.

The art in question is a clay fish he made at a friend’s birthday party. 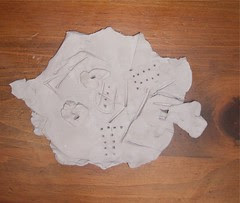 fish
Originally uploaded by Teckelcar. Max and Rebecca had a lot of fun at the party, it was the very first birthday party that they had been invited to attend. It was a momentous occasion for the two of them. The birthday girl’s Mom was also very smart and sent individual invitations, the two of them were thrilled to get their own mail. The party itself was also a big hit. It was at a neat little place called Art Adventures. Tucked away in a small strip of shops off the beaten track, I certainly never would have found it on my own.

Anyway, back to the fish.

According to Max it eats people, sharks and lions. It is actually a friendly fish; it only eats you if you make it angry. The only thing it is scared of is triceratops. Rebecca then said if she saw it she would throw rocks at it. Max then told her that would make it angry and it eats rocks.

That is one formidable fish.
Posted by Sarah at 12:47 PM