Friday Crunch found a new toy in our backyard.

He was at the back door with John and eager to come inside. As I opened the door he picked up his new treasure and tried to bring it inside.

It was a box turtle.

I was on the phone at the time and my caller got treated to a loud “No, you can’t bring that turtle inside! No turtles! Drop it Crunch!”

I pried the poor thing from my dog’s jaws and placed it on the table out on the deck. The turtle’s shell was tightly closed and the shell looked intact. This was an improvement over the last turtle Crunch found. About three or four years ago Crunch found a similar turtle in our backyard. I wasn’t aware of it until it was too late. It turns out if you leave a dachshund alone long enough they can chew through a turtle shell. At first I thought he had a branch or something and was happily gnawing away. After about two hours I went out to see what on earth he could chew on for such a long time. I was horrified to find that my dog had busted through the shell and was trying to eat the turtle. I like turtles and I felt horrible about its death. From that point on I made sure that Crunch didn’t repeat that particular feat in persistence.

Meanwhile Crunch was very disappointed and started to bark at the table. He wanted his new toy back and he wanted it now.

I then excused myself for a moment and relocated the turtle to a safer spot. The dogs tagged along, but left as soon as they realized that their new toy was out of reach.

Once I was done with the phone I rounded up Max and Rebecca to show them the turtle. We put on our boots and tromped out to see if it had moved. It hadn’t, but it had been having a very bad day and it really wasn’t that long since I had rescued it. While we were standing there I decided it would probably better for the turtle if we moved it to the other side of our property, down by the stream. This struck me as a better habitat and the turtle wouldn’t have to cross our lawn of doom in order to reach water.

We found a nice spot across the stream. I placed the turtle down in a grassy patch dappled with sunlight near the stream. We splashed a bit in the water and then left the turtle to its own devices.

An hour later I went back with my camera in hand. I looked for a bit, but it was long gone. I was little disappointed, but mostly pleased that it was able to leave. 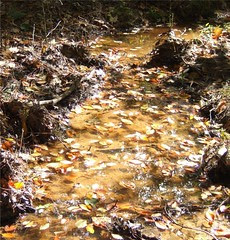 stream
Originally uploaded by Teckelcar. I took a few pictures of the woods and headed back inside.
Posted by Sarah at 11:59 PM