It has been a very big year for Max and Rebecca. They are big kids now, what with going to preschool, being on a soccer team, having actual chores and getting an allowance.

One of the side benefits to going to preschool and playing sports is that they now have their very own group of peers that can be invited for birthday parties. We invited their whole class and a boy who was on their soccer team last season. Out of the eight invites we got four attendees, a very nice number of guests for our little soiree.

The big plan was to have the bouncey tent up for the party. For the past week I have been obsessively watching the forecast for today’s weather, cool would not be a problem, but rain would effectively torpedo that idea. Fortunately the predictions all along were for clear and cool weather. And that was exactly what we got. It was one of those brilliantly sunny fall days, the air was crisp and the sun was bright, perfect weather for a bouncey tent.

The bouncey tent was, of course, a huge hit.


All of the kids had a great time including a not-even-three year old little sister. Her big brother was the official guest, but she was more than welcome to join in. She had a fabulous time climbing up and sliding down (they hadn't arrived yet, so they didn't make the video).

Meryl had come over for the party and observed as one kid after another came flying down the slide that we were now possibly the coolest parents around.

The best part was the hair. It was very dry and a terrific static charge was being built up from sliding down the slide. The result of which was some very impressive flyaway hair. (Note: Click the picture to see the whole set.) 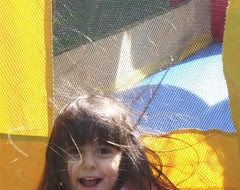 wildhair
Originally uploaded by Teckelcar.
I think Rebecca’s was the most impressive simply because she has the longest hair, but Lydia was up there too. Even Brian and his little sister’s hair started to lift away from their heads. The only exception was David; his hair is far too short and curly to pull those kinds of shenanigans.

The kids also played in the hammock and in the sand piles. 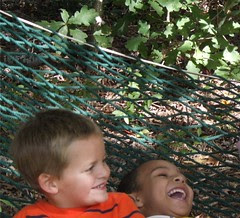 joke
Originally uploaded by Teckelcar. Rebecca had just told Aubrey and David a joke when I took this shot. Apparently it was rather funny, but I completely missed it. Of course since it got such a good reception she kept telling the same joke again and again until she lost her audience.

Then it was cake time.

Twins&Birthdaycakes
Originally uploaded by Teckelcar. The basic cakes were the same as last year. The biggest differences were that Max wanted a smiling Orca on his cake and soccer ball candles.

When it was all over, the presents having been opened, the guests all having gone home and the tent being deflated Rebecca came up to me with a solemn little face and said “I want another birthday.” I told her she had to wait until next year. With a big sigh she than turned away from me. Max meanwhile focused on the positive and he said “that was the best birthday ever.”