Last Thursday was interesting. I had all sorts of things planned out after I saw the boys to the bus and dropped the dynamic duo off at preschool. There were boring things to do such as take dogs to the vet and fun things like going present shopping for Max and Rebecca. I had four lovely hours to do things that are either better without an entourage (the vet) or are not possible with my two charming assistants (birthday present shopping for the selfsame assistants.) The timing was going to be a bit tight, but I was pretty sure I could pull it all off and be able to have a nice bite to eat.

I got Jake and Nate to the bus without incident and then I drove Max and Rebecca to their preschool. When I opened the van door I noticed Rebecca’s socks. Her pretty bright pink socks that she put on so carefully with the cuff turned down just so. This was not good, because I only saw socks, not a single shoe was in sight.

In a calm voice I asked “Rebecca where are your shoes?”

Well maybe not all is lost; “Did you bring them to the car?” was my next question. Sometimes when we are in a hurry the kids bring their shoes and socks into the car and put then on en route.

“Did you leave them at home?” At this point I was getting a little desperate, my plans were falling apart. I really did not want to go back home and fetch shoes, I would lose half an hour out of my schedule.

“I don’t know, I forgot” was her only slightly anguished reply.

So I decided to drop off Max (which put him into a snit). The staff at the preschool were amazed that she had on socks, but no shoes.

Rebecca and I then went back home to get her shoes and load up the dogs for the vet. My vision of playing on the internet and having a nice croissant before going to the vet was over. Instead I would drop off the girl and then head over to the Vet’s office. I would be a bit early, but then I would in all likelihood get out early.

I got Rebecca back to school, now properly shod, just before circle time so she really didn’t miss much. Max at that point ws over his snit and was happy to see me and his sister. Then it was on to the vet. I ended up being 20 minutes (!) early and we were out 10 minutes after what would have been the start of our scheduled appointment. This left me plenty of time to do my errands and have a nice lunch at home.

That night I got an explanation for Rebecca’s absent mindedness. She woke up crying with a fever; Friday morning I took her in and guess what.

She has strep throat. The poor thing had been ailing and I didn’t know it. The funny thing was she was very chipper the whole day. She spent all of Max’s soccer practice on Thursday showering me with kisses... on the mouth.

At least we got her (and her brother, he got diagnosed the next day) on antibiotics fast enough that they could still have their birthday party. Right now she is napping on the couch. 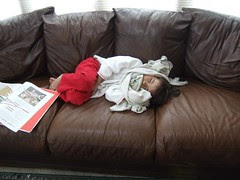 nap
Originally uploaded by Teckelcar. Being sick and having “the best birthday ever” took a lot out of her.
Posted by Sarah at 2:01 PM