Tonight was Rebecca's turn to light the menorah. She wasn't as self assured as Max and I ended up holding her wrist and guiding her hand.

After the candles were all lit and the blessings recited, there was a mad scramble by the older boys over who gets to "light" the felt dachshund hanging. So far it has been Rebecca's project and she was very upset that someone else would dare do it. I was barely able to mollify her when I reminded her that she got to light the real candles tonight.

To prevent future arguments I brought out our other fabric menorah. 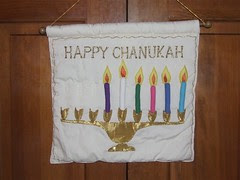 FifthNight
Originally uploaded by Teckelcar. We have had this for quite some time and it has held up very well. Normally I would bring it out the first night, but is was stuck in a bag in the dining room and I had forgotten that it was there. It had spent the past week and a half in Nate's classroom in preparation to "Cultures Around the World day". I had brought it home Friday, but I was in such a rush to leave the house that it sat in it's bag until tonight.

The hanging is rather detailed. The candles are fully three dimensional with the shammus being a touch longer and having a slightly larger diameter. The candles all fit neatly into the little fabric pockets that represent the candle holders. The flames are removable and stay in place courtesy the magic of Velcro. I bought it from the same place that I got the little fabric book featured on the second night.

What I like most about the fabric menorahs is that the children can be fully in charge and I don't have to worry about them getting hurt or burning the place down.
Posted by Sarah at 11:55 PM