Artist of the Week: Dominoes 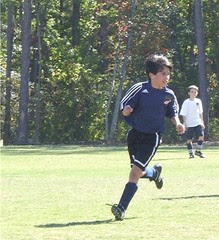 Jake
Originally uploaded by Teckelcar
This week's artist is Jake. For once I was able to watch some of his game this past weekend and I got this great shot of him in action. He loves playing soccer and this past week he had a lot of fun. His team lost, but it was a good game. I had fun watching him as well and had the added bonus of watching Nate too. Jake's team at best will have only substitutes at any particular game. It's hard on the players to out there running around for the full hour so when Nate is done he gets to sub in and give them a much needed break. It's fun watching the two of them together on the field.

Anyway, back to Jake.

He made this neat little structure about a week and a half ago and it is made from dominoes. Everything and I mean everything in this household gets used as a building material. 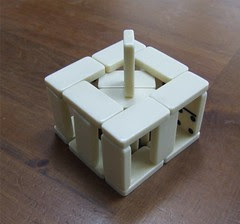 dominoes
Originally uploaded by Teckelcar
He made it one afternoon after school. As I recall this was actually a rebuild of the original structure. One of his siblings knocked into the table jarring the structure and causing a few dominoes to fall. After the initial outrage, Jake was able to repair the structure and I was able to photograph it.

It makes me think of a little Roman temple with its smooth white surfaces. The structure is just a pleasure to look at. I like Jake's sense of design and proportion.
Posted by Sarah at 11:01 PM