Artist of the week: Pumpkins 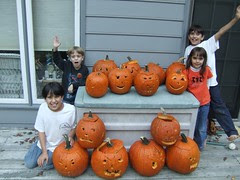 Happy Halloween
Originally uploaded by Teckelcar
It's Halloween and it's all about the pumpkins.

I never carve the pumpkins ahead of time, I wait until the day itself. Part of it is procrastination, but there is also a logic behind it all. Pumpkins rot and the earlier you crack those babies open the longer they have to molder. There is nothing worse than reaching into a pumpkin to light it on All Hallows Eve and finding a thriving colony of black slime. And Virginia has both the mold, the humidity and the heat to make it all happen.

This week we are all artists of the week. Jake got to carve his pumpkins on his own for the first time. All I did was open the pumpkin up for him. He was so excited to be able to do it all on his own this year. 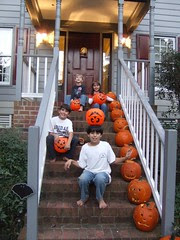 on the steps
Originally uploaded by Teckelcar
Nate designed a very elaborate skull themed pumpkin that I did my best to carve. Then, when he saw his older brother carving pumpkins, he decided to try to do his own. It started out fine, but in the end he was a bit overwhelmed and asked me to finish it off.

Max was happy to have me create his first pumpkin, a happy bat. At first he only specified a bat, but knowing Max I asked if he wanted it to be happy and yes he did. His second pumpkin he actually picked up the marker and designed it himself.

Rebecca's first pumpkin too was a happy one. Her pumpkin is a nice classic design that was a snap to carve. The second one, however was a bit more intricate. As I struggled to carve out her vision she told me that she forgot that I was going to carve the pumpkin, she was just drawing a picture. But that didn't stop me, if they can draw it, I can carve it. 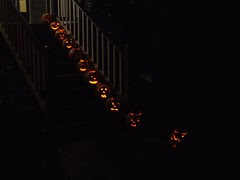 all lined up
Originally uploaded by Teckelcar
Myself, I got to carve six of my own design. The kids thought it was unfair, but since I bought 'em I get to choose what happens to them. I made two traditional jack-o-lanterns, a cat and a skull. Then this year I tried two new ideas, a dragon and a ghost. I was very happy with how both turned out. The kids all loved the ghost and Nate was very impressed with the dragon. He told me that the dragon after I carved it didn't look like much, but when it was lit up he was very impressed. You could really see the dragon's face once night fell and the candle was lit.