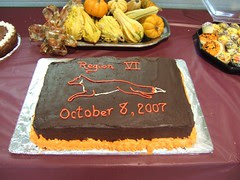 cake
Originally uploaded by Teckelcar
So of course I made some cakes for the dog show last weekend, heck I was the unofficial dessert chair. I ended up making one sheet cake (pictured), two pumpkin pies and two flourless chocolate torts.

The pies were a snap to make and transport as were the torts. The sheet cake was a bit trickier and needed its own seat in the car. I wisely decided to save all detailed decorating at the show site's kitchen. The torts got wrapped in plastic and the sheet cake got just the base of chocolate icing.

The night before the sheet cake was served I freehanded the design on the cake. It was a three specialty show weekend and they were being called the Hunt Country Specialties, hence the fox. I was a bit bored of making Dachshunds and decided to go for the show logo instead. The first tort got its whipped cream piped on just before being served, the second one was held in reserve.

The pies were a bit hit and were mostly gone, all I brought back home was two slices. The first tort was also mostly consumed, I decided not to bring out the second "back-up tort," instead I brought it back home where it is now safely tucked inside my freezer. (It can be safely frozen for up to three months, after that it starts to lose its flavor.) Only a third of the sheet cake was consumed, people liked it, but there was just too much food. Which is fine with my family since they now get to enjoy it.

Oh and about the sheet cake. If you look closely at the upper left hand corner you will see that it is missing. My dog John nailed it while it was up on the dining room table. I trimmed up the nibbled parts and refrosted the cut area. I wasn't too concerned about what people would say, since they were all dog people. In fact it was one of the very few audiences that would appreciate the humor and would not be horrified about the idea of eating cake that a dog had nibbled. However I don't plan on letting John sample any more of my cakes, next time I'll push the cake closer to the middle of the table where he can't reach.
Posted by Sarah at 12:14 PM