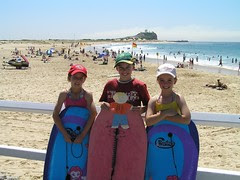 Nobby's Beach
Originally uploaded by Teckelcar
Flat Stanley is back home from his Big Australian Adventure.

The doorbell rang today and as I unlocked it I wondered who on earth it could be. It was our mail carrier with an our regular mail along with an express package that required my signature. As I scrawled my name on the slip I excitedly asked "Is it from Australia? I'm waiting on a package from there." She didn't know off hand, but I knew the second I saw the sender's name. It was indeed Flat Stanley. After bidding the mail carrier goodbye I rushed indoors to open the package. 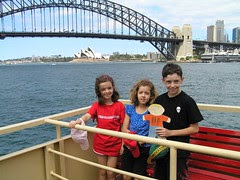 Sydney Habour
Originally uploaded by Teckelcar
Technically the package was for Nate, but it was addressed to me so I had no qualms opening it up.

Our friends had completely out done themselves.

In addition to Stanley they had sent four little Australian flags, a bunch of books and brochures, a map of their area and a CD with 126 photos. Paul had offered to print out the pictures, but I told him a CD would be fine. I figured it would be easier and cheaper for them and seeing the number of photos I know I was right.

The first thing I did was to check out the photos on the cd. There were so many good ones I ended up going out to a store to print them out. I quickly browsed through and selected 88 frames, a number that would have surely sent my little printer over the edge. 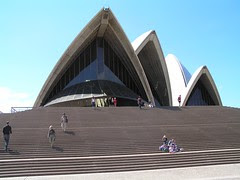 Opera House
Originally uploaded by Teckelcar
It was hard winnowing out the pictures even further for this post. I decided to go with the classic shots that had been taken with Stanley.

The timing of the project had been perfect. I sent off Stanley at the end of September and he arrived done under during their two week school vacation. Their three kids were off from school and they would be able to give Stanley a grand tour. The kids are just the right age to help out Nate with this project. Ben is the oldest and is less than a year older than Jake. He was born in America while Paul was working in my Lab. The girls, Kirrilly and Jessica are twins that are just about Nate's age. They were born after Paul and Melissa returned to Australia. 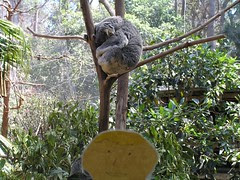 koala
Originally uploaded by Teckelcar
Anyway, back to Stanley. His first trip was to the beach. It's the first picture and I love it because coincidentally Stanley's shirt features surf boards and there they are, all lined up boogie broads. It turned out to be a very appropriate choice of attire.

Stanley's next big adventure was to tour around Sydney harbor in a variety of ferry boats. Paul got a great shot of his kids holding Stanley with not only Sydney harbor bridge in the background, but also The Opera House. Which leads to the really cool photo of the steps leading to the Opera House. If you look carefully you can just see the kids at the top of the stairs. 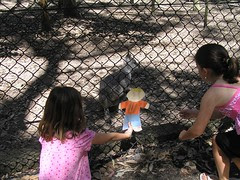 young Eastern Grey Kangaroo
Originally uploaded by Teckelcar
Later in the week Stanley got to go to a nature preserve not far from our friends' home. He got to see all sorts of Australian fauna including the big two, koalas and kangaroos. There was also a very cute picture of a baby emu, but I skipped it here since Stanley wasn't in the frame. Stanley also got to go on a hike and see some of the rugged terrain in the area.

Of course no trip would be complete without at least one sporting event and Stanley got to go to several. Kirrilly participated in a Little Athletics event and later he got to watch a cricket match and a soccer game. 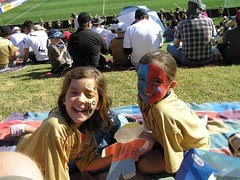 Go Jets!
Originally uploaded by Teckelcar
The soccer match was very exciting. There was face painting and their team, the Newcastle Jets won. I wonder if Stanley got his face painted? Probably not, since he was just visiting, but I bet Nate would have joined in.

I think Stanley had a great time visiting our friends in Australia. I would love it if we could go visit them too. 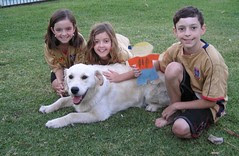 Stanley with Kirrilly, Jessica, Ben and Geisha the Golden Retriever
Originally uploaded by Teckelcar
Posted by Sarah at 11:59 PM