Flaming Ambulance
Originally uploaded by Teckelcar
Today we took the whole crew to one of the small airports in the area for an air show and nothing says air show like a flaming ambulance.

The ambulance was a tricked out truck painted like an ambulance with a jet engine mounted in the back. It was incredibly loud, fast, spewed a huge flame out of the back and Nate loved it. The driver could make it produce a huge pulse of sound that you could actually feel in your chest. I have to admit that I though it was pretty cool too. 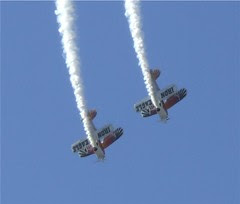 Iron Eagles
Originally uploaded by Teckelcar
After the excitement of the ambulance roaring up and down the runway we checked out the NASCAR show car and the ubiquitous bouncy tents. Or more accurately the dynamic duo did the bouncy tent (shaped like the fuselage of a plane) and the boys checked out some planes on the tarmac. All the while planes buzzed about overhead.

The next act to catch our eye was a duo of stunt planes called "Iron Eagles." They put on an amazing show, the two biplanes perfectly matching each other. The planes did an incredible series of loops and rolls that completely captivated me. The smoke trailing from beneath them added to the show as they inscribed the sky with their routine. 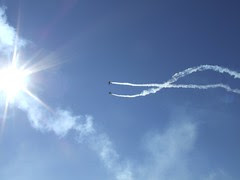 bright and twisty
Originally uploaded by Teckelcar
In fact I got the best shot of the day when tracking them across the sky. I was annoyed as they flew towards the sun as I took frame after frame. It wasn't until I got home and downloaded the pictures that I could see how well the last frame I took came out. It violates the big rule of not shooting into the sun, but I love the great big flare of light in the picture. Bright and twisty indeed.

But that was not all, not by a long shot. The last act we caught was a group called American Barnstormer, Walt Pierce home of the Double Trouble Wing walking team. I didn't realize what was going on until I noticed the small upright figure on top of the plane. 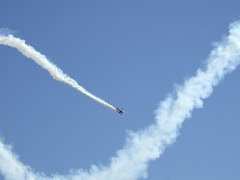 Wing rider
Originally uploaded by Teckelcar
It was with a sort of sick fascination I watched them. I couldn't believe that anybody could ride on top of a plane's wing while a plane executed all sorts of acrobatic maneuvers. I mean for crying out loud she was up their while her grandfather made the plane spin and loop about. I could have cropped the picture smaller so as to see the figure on top, but then you miss out on the smoke trail that shows where the plane went. It was incredible.

After an hour and half of excitement the kids then blew their allowances on a variety of model airplanes and then we headed back home. All four loved the show (Rebecca the most, she didn't want to leave) and want to go again. Max was particularly funny since he didn't want to go at first, but was full of smiles in the end. He was so happy as he left the show, broadly grinning and waving at the troopers, that the two policemen he passed couldn't help but break into huge answering smiles.
Posted by Sarah at 11:55 PM