The Worst Field Trip Ever 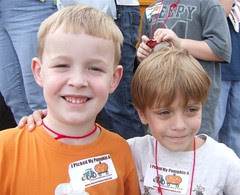 Max & Friend
Originally uploaded by Teckelcar
At least according Max.

Max was happy as was his friend when we first arrived. Then we waited. And waited some more for the tractor to take us out to the field to "pick" our pumpkins. But, there were dark clouds on the horizon, literally. A huge storm front was on its way to finally bring us some much needed rain. We could all see it massing to the South West of us. The parents nervously joked about it and we all hoped it would at least hold off until we got back to the buses. 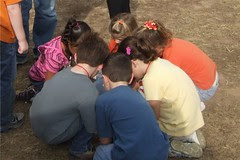 grub
Originally uploaded by Teckelcar
As the wait dragged on for the tractors, the children got very antsy. One small group found a grub and were completely fascinated by the little creature. I jokingly pointed my camera ans announced that I should take a picture of what may be the high point of the trip.

Max, meanwhile, was very hungry and kept pestering me for food. It was about lunchtime and he was ready to eat and wanted to leave. The pumpkin patch was quickly losing its allure. Rebecca was as far as I knew fine. I'm not entirely sure about her because she elected to stay with her class. 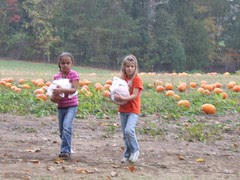 wet rain
Originally uploaded by Teckelcar
Finally the tractors started to pull up to our crowd. Max's class was the last to load and just as we started to pull away from the buses the rain hit. And boy did it hit hard. A few minutes later the temperature dropped a good 10 degrees. Things were looking grim for pumpkin picking.

And grim it was. This was possibly the fastest pumpkin picking ever. As we stepped out into the cold, cold rain the kids milled about clutching their plastic bags. They would pick up whatever pumpkin was pointed out to them, stuff it in the bag and then look for shelter.

In previous years most kids would agonize over their pumpkins, spending a good twenty minutes going from pumpkin to pumpkin until finding the perfect one. Usually the arrival of the tractor to take them back would force the decision. But not this year, we grabbed our pumpkins and then huddled at the edge of the field under the trees. 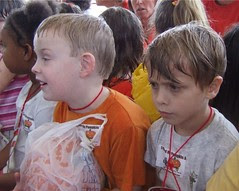 not happy
Originally uploaded by Teckelcar
Max was not happy.

He hates being cold and wet. Being hungry on top of all that made him one miserable little boy.

Most of the kids perked up once we were picked up by the tractor, which thankfully had a top that kept off most of the rain. But as you can see Max was deep in his funk and nothing was going right for him. It was at this moment he told me this was the worst field trip ever. And I kind of had to agree. Though I must note that he was his happy self again after he got to eat his snack on the heated bus.

Normally we would have done a few more things at the pumpkin patch, but we all agreed it was time to head back to school. I hope the next field trip works out a little better than this one.
Posted by Sarah at 11:08 PM