Artist of the Week: Second Concert 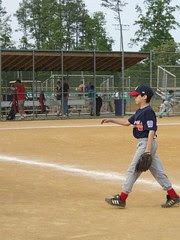 Jake
Originally uploaded by Teckelcar
This week's artist is Jake.

My best pictures of him are almost always taken when he is unaware of what I'm doing. He is not hiding, goofing off or twisting his face into some sort of fixed smile. Instead he is just himself, a boy striding across the infield before the start of the game. Focused on what is about to happen and ignoring everything else.

Sometimes, like at last night's game, he does want me to take his picture, but that is a rare event now. I'm much better off sneaking up on him like I did a week ago when I got this particular shot.

Fortunately he is cooperative when I tape his performances from band class. He understands that it is a performance and that he is expected to play his instrument in front of a crowd that has free reign to photograph and video tape.

Monday was his second band concert for Beginning Band.

His level, beginning, played four songs: Knights of the Round Table (the video above),Genesis, Acclaim March, and The Tempest.

They are not the best band, but they have improved over the school year and they put in an honest effort. The percussion is amazing at this level and I can see why half of the percussionists in the District Band come from Jake's middle school.

But the best part for me is that Jake decided to go on with band next year. It's up to the teacher to decide if he'll get into Intermediate Band, but I think he will.
Posted by Sarah at 2:00 PM