Artists of the Week: Piano 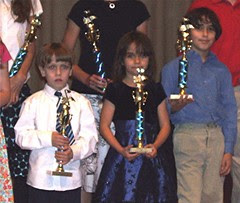 Nate is an old hand at these and it was Max's second, but it was Rebecca's very first one. As an added bonus they received their trophies at the end of the recital. A few weeks before the recital the teacher's students are invited to be judged by another piano teacher. They students memorize and then play 6, 8 or ten pieces of music. If they are successful they will earn a small, medium or large trophy. My crew went decided to go for the small trophy and, as you can see by the very grainy photo, they each got one.

At the recital Rebecca was first one up, being the youngest performer and the least experienced. Rebecca was very excited and was eager to go all day long. She would get to wear her fancy dress and have treats afterwards. Her two pieces of music were My Dog Spike and Merrily We're Off to School.

She was a little hesitant at first with, but was able to step up and perform both of her pieces. I think she did a great job.

Next up was Max performing Party Cat and Mr. Machine.

Unfortunately my camera's batteries died just after he started his first piece, but I was able to get the spare set on hand in before his second and last song. He had his music book in front of him, but that was just to give him confidence. He knew both pieces by heart.

Then it was Nate's turn. As I stated earlier recitals are old hat to Nate.

He did a great job with both pieces. The first one, Chorale, is a very pretty piece of music, but Banjo Picker is where Nate really shined. It is a bouncy and rollicking tune that suits Nate to a tee.

They all had fun and overall it was a very good recital.
Posted by Sarah at 5:07 PM