Artist of the Week: Unusual 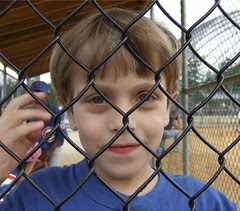 Max
Originally uploaded by Teckelcar
This week's artist is Max. He had a t-ball game tonight and I got this picture of him in the dugout.

As for this week's art, it is a drawing he brought home from school a few weeks ago. His teacher had passed out to the class two sheets of paper with one letter, a U and a K, on each one. Their assignment was to create a picture incorporating the letter. There were no other limitations. The children were free to do whatever they wanted, they could orient the paper any which way and they did not have to have something starting with the same letter in the picture.

And this is what Max did with the letter U. 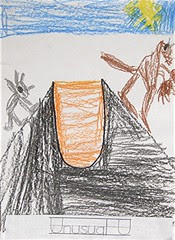 unusual U
Originally uploaded by Teckelcar
It is a volcano with two dinosaurs, a Triceratops and a T. Rex, climbing on its sides. The letter U forms the lip of the volcano and contains the molten rock within.

Max loves dinosaurs and these are his two favorites, the Triceratops being the one nearest and dearest to his heart. I am amazed that his picture did not have his usual complicated battle scene. It is nice to see him branching out into dinosaurs for change. Maybe the title of the project "Unusual U" is what got him to do something a little dbit different.
Posted by Sarah at 11:37 PM