Field Trip to the Zoo 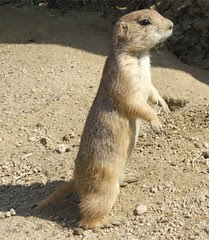 prairie dog
Originally uploaded by Teckelcar
Today I got to go to the zoo with entire kindergarten from Max and Rebecca's school.

The kindergarten trip to the zoo is an annual event and it was the first year I could attend. The zoo itself is real not a big deal for our family, being season pass holders for over four years, but it is always fun. Today's trip was no exception. The prairie dogs were feisty today and would come very close to the enclosure's fencing. As a result I was able to take the best photo I have ever taken of a prairie dog.

Anyway, since this was a school trip there was an actual educational portion to our visit. We got to learn about birds, reptiles and mammals on a kindergarten friendly level. But the best part was that we got to see some examples up close. Much to Max's delight TJ the penguin was brought out for the bird portion. Then the handler announced next up would be reptiles. After a little discussion about what is a reptile she went in back to fetch an example. At this point about a half dozen people left the amphitheater. They (rightly so it turns out) thought a snake was going to brought out and wanted to leave before the handler returned. And what a snake it was. Mac is an albino Burmese Python that is 10 feet long is about 10 years old. I thought it was neat that we could for once get a clear view of the snake and get a better idea of its size. Next up were mammals and we got treated with meeting one of the zoo's young chimps. I *think* its name was Quentin, but I do know it was male and very cute. Then it was off to see the zoo.

Max and I did a quick tour, it was getting late and he was getting hungry. S we headed back for snack we met up with some of Max's classmates. One of them wanted to see the bats and I offered to take him in. The other mom was very happy to skip that portion and Max was happy to have a friend in the bat house. Max, strangely enough, loves going to see the bats. He gets freaked out over all sorts of ordinary things, but not bats. That is the mystery of Max. After the bats we had snack and then a quick run to see the bears. 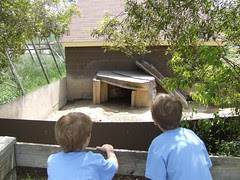 Who is who
Originally uploaded by Teckelcar
On the way I took this picture of Max and his classmate. They are looking at the porcupines and I was struck by how much physically alike the two boys are are. When viewed from behind they really look more like twins than Max and Rebecca. I can tell them apart, but can you?
Posted by Sarah at 11:42 PM