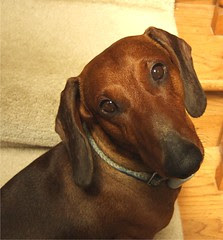 Dell
Originally uploaded by Teckelcar
It has been a eight weeks and Dell has wormed his way into our hearts.

Dell is a little wiggle worm. He's is always rolling over onto his back and waving his front paws. If you sit on the floor he'll try to crawl into your lap or under your legs, madly wagging his tail the whole time. I found that he'll wag even harder if you say his name in a bright and happy voice.

He and John get along very well. There have been a few disagreements, but nothing serious. They love to wrestle with each other and just like Crunch did with John, they are usually at my feet. The funniest thing they do when wrestling is when they are side by side and both on their backs mouthing each other. When they are outside they careen across the lawn bumping into each other. It's almost like a roller derby out there. Then they rush back indoors to flop at my feet.

Interestingly John has matured immensely with Dell in the house. He is no longer destroying toys left and right, that seems to be Dell's job for now. At least Dell drops things when asked with John it was more of a 50-50 prospect. However Dell hasn't learned to stop barking when asked. John is fairly quite with a very classic scent hound bell like aroo type bark . Dell, on the other hand, has a much more robust bark. He sounds far bigger than he is. Which I guess would make him a good watch dog. I just wish he would knock it off when told too and wasn't so chatty at night. 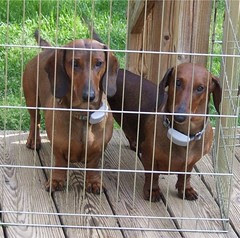 Overall it was a good thing to get Dell. Now have two very silly and very happy red boys.
Posted by Sarah at 11:47 PM