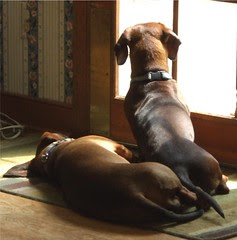 The two sons we have, John and Dell, are happy, affectionate and easy going boys. They love the kids and they mesh together very well. Crunch's waggy tail and friendly nature are readily apparent through most of his get.

In addition to his wonderful temperament Crunch also bestowed a couple more things to his boys. They both have very well developed prey drives. Dachshunds are hunting dogs and this is clearly applies to John and Dell. John has been a bit obsessed with moles recently (to the detriment of our lawn) and Dell is always using his nose outside.

Then there is Crunch's quirky little habit of sucking on ears. He used to endlessly suck on poor Rally's ears, leaving them slimy with his saliva. When we brought John home we thought it was fitting that John sucked his father's ears. At the age of 14 Crunch had stopped bothering Rally and was instead the target of his son's affections. 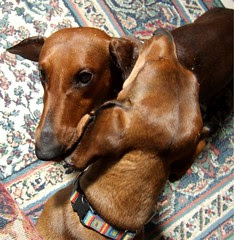 ear suckers
Originally uploaded by Teckelcar
After Crunch passed away John no longer had any ears to suck, but then we got Dell. John enthusiastically resumed his ear sucking habit, but with a twist. Dell is an ear sucker too. Dell doesn't do it as much as John. Mostly it occurs when there are wrestling about as in this picture.

It was definitely one of Crunch's least charming traits, but it is interesting to see how it is being carried down the line.
Posted by Sarah at 12:51 PM