Artist of the Week: Academic Excellence 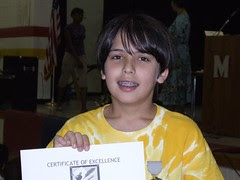 Jake
Originally uploaded by Teckelcar
Today was the Sixth Grade Award ceremony over at Jake's middle school. A notice had been sent home last week inviting us to attend since Jake was to receive an award. What the award was for was not revealed and it was requested that I keep the knowledge of the award secret from Jake. The organizers want the kids to be surprised.

Right, I'm to keep this secret from a very smart and inquisitive kid. The same kid that was given an envelope (at least it was sealed) to take home to his parents and bring back a reply.

We just settled on leaving the mystery of what the award was to be and left it at that.

However we had a good idea of what it was going to be about. Jake had scored a perfect 600 on all three of his SOL's this year and had at least a B or better grades.

And that was exactly what he got.

Jake got an award for being on the distinguished Honor Roll (I'm not sure what that means) and a certificate for each of his perfect SOL scores. The really neat part was that he was the only kid to get all three scores perfect 600s. Not too shabby.

He is one very smart cookie.
Posted by Sarah at 2:12 PM