I Think I Got My Money's Worth 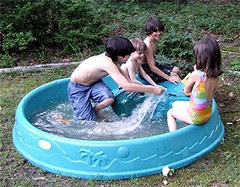 wading pool
Originally uploaded by Teckelcar
And then some.

I bought this wading pool almost nine years ago. It was just after we bought this house. We had a little inflatable one, but it wasn't quite enough.

I really got it for Nate. He loved (and still does) getting in the water and splashing about. It was the end of summer when our inflatable pool gave up the ghost, but it was going to be warm for quite a bit longer. I went to a Toys R Us and scooped up their last one. It was steeply discounted and they had to drag it out from the far reaches of the stock area. I wrestled it onto of the van and triumphantly brought it home.

Both of the boys were delighted and all four have played with it every summer. I store it under the deck during the winter and when the occasional hurricane roars through. It is absolutely disgusting when I pull it out, but with a little soap and elbow grease it cleans right up.
Posted by Sarah at 11:17 PM