Artist of the Week: Picture Stories 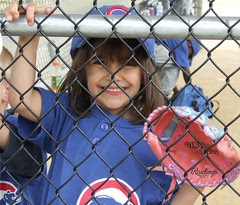 T-ball has long since ended , but this is a terrific shot of her in the dugout. You can see her bright smile. She had a great time this season. She claimed all she liked was hitting the ball and getting the end of game snack, but I could she that she was having fun with her teammates in the dugout and was very focused in the field. But enough about t-ball.

Last week she brought home a ton of papers from school and I finally got around to emptying her backpack just the other day. Amongst the jumble of worksheets and pictures I found four sheets of paper neatly paper clipped together. I uploaded all four pictures, so if you click on the picture I posted here it will lead you to the picture set in my photo stream. 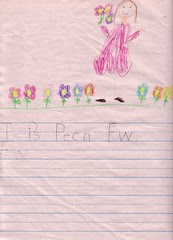 Picking Flowers
Originally uploaded by Teckelcar
The pictures are utterly charming. Each sheet had an illustration and a few lines describing what is going on in the picture. The spelling is creative, but I was able to puzzle out the gist of the stories.

It's hard to say which one was my favorite. I really like the dog walking picture. The dog is obviously a dachshund and Dell, of the eternally wagging tail, was clearly the inspiration. The bird in the rocket is also wonderful and has a far more involved storyline. I wasn't able to figure out the end, but that is not a big deal. The dog playing fetch is also fairly involved and it was hard to decipher the storyline. Then, of course, there is the self portrait of Rebecca picking flowers.

They are all beautiful and I'm really impressed by the quality of her writing. Rebecca has come a long way this year and I have credit her teacher for teaching my little girl so much.
Posted by Sarah at 11:53 PM