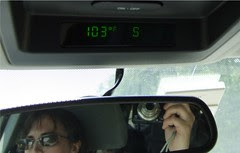 too hot
Originally uploaded by Teckelcar
Yesterday Jake and Nate had play off games. Nate's baseball game was at noon and Jake's was right after at 2:00 pm. I spent the day shuttling kids back and forth because it was to hot for them to just hang out at the field. In fact the temp was measured on the field during Nate's game at about 102 F.

I even snapped a picture of the car's thermometer. It was truly ghastly outside and it well be even worse today.

Both boys were fine. We pushed water on them and made sure they kept cool, quite and hydrated. Nate's team lost, which is fine. It is a double elimination tournament and it was their first lost. As for Jake's team, they kicked butt. They only had 9 kids show up and they won 11 to 3. And according to Jake, they went through 200 cold towels.

Hopefully the temps will be better later in the week.
Posted by Sarah at 10:50 AM