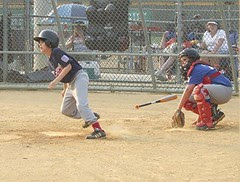 He hits
Originally uploaded by Teckelcar
On Saturday was our last baseball game of the season.

Jake's team, the Braves, had also made it to the championship game. They were up against their main rivals and got to play them Friday night. The Cubs just barely won (one more inning and I think our boys would have pulled it off) and forced a second game.

It was, again, brutally hot out and the game was at noon. Jake's team got to be home and their best pitcher was once again eligible to play (there are strict pitch count rules and he was on mandatory rest after his last outing).

The game was a close one. 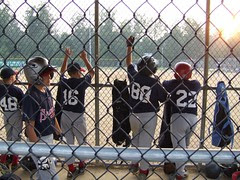 Braves
Originally uploaded by Teckelcar
We started out with a bang, but the Cubs were no slouches. They surged ahead, but we were almost able to catch them. We lost by just one run. Most of the boys were crushed, but not Jake. He was happy to have made to the championship games. He had a good game, he made a few good plays and a decent hit or two. And for once he had been on a winning team.

The Braves had dominated the regular season and had been undefeated in the playoffs until the the championship games. They had beaten the Cubs in a close match earlier, but in the end they just couldn't quite put them away.
Posted by Sarah at 11:55 PM