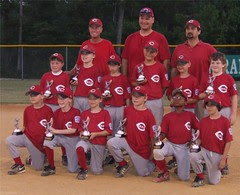 They were able to defeat the other team the previous night and force the second game.

And what a game it was. Our boys duked it out with the Orioles until they reached an unsurmountable lead in the fifth inning. The most amazing part was Nate.

He had been playing catcher in 100 degree weather and was still focused and making big plays at home plate. He is the team's best catcher and that was the position he played 24 1/3 innings out of the 29 innings of the playoffs. The rest of the time he was either shortstop (two innings) or pitcher (2 2/3). And to make it even more incredible the other team could not get a single hit off of him when he pitched. 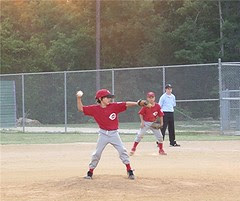 ready to fire
Originally uploaded by Teckelcar
In fact he pitched the last two innings of the final game. During the last inning he struck out two and caught the final out.

As I said to Nate, "Honey you own home plate."

This got a shy little smile and he ducked his head, pleased that I noticed what he is capable of doing. But of course Nate is still Nate. And when he wasn't out on the field he would inevitably be found in the bucket.

In the dugout there would be a large bucket for the balls. The bucket would normally be positioned near the exit to the main part of the field. Nate loved to sit not on the bucket, but inside the bucket. He evened got the nick name "bucket-boy." 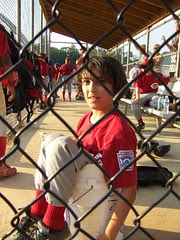 in the bucket
Originally uploaded by Teckelcar
He'd happily sit the the bucket watching his teammates bat. Rocking back and forth, spinning around and just being silly. It didn't strike me as a particularly comfortable seat, but what do I know.

Anyway, it was a great game that kept us riveted in our seats until the final out.

Right after the game ended the league officials brought out the trophies and awarded them out on the field. The stands all poured onto the field to watch (and photograph!) the presentation.

It was quite a night.

Nate
Originally uploaded by Teckelcar
Posted by Sarah at 11:13 PM