Yet Another Busy Weekend 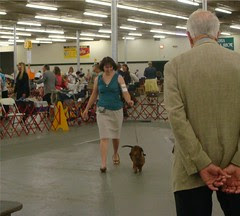 down and back
Originally uploaded by Teckelcar
To say we had a busy weekend would be an understatement. This weekend we had two dog shows and four birthday parties.

Luckily the timing worked out. The dog shows were in the morning and, after a bit of fortuitous last minute rescheduling, the parties were all neatly spaced. Originally the two parties Nate was invited to were on at the same time and, ironically, at the same location. But due to baseball games, one of the parties got bumped back several hours and Nate got to go to both.

As for the dog shows, Saturday was my club's specialty show. Since I'm the president of the club I elected not to show. In reality I'm a nobody and in this particular case AKC rules don't forbid me, but I felt that ethically it would be best that I sit this one out. instead I got to watch the show and see Dell's sister Trudy finish her championship. Today, however, I was free to drag my boys out to the show. I drafted Jake to be my dog holder and possibly show Dell if needed.

Meryl was ring side and snapped few pictures of me in action. In this picture I'm with John, going down and back for the judge. At first John was a bit wild, but after a bit he did settle down. I have a big smile on my face because I was happy with John and pleased that he defeated his competition in his class. However, this meant Jake had to show Dell in winner's class. 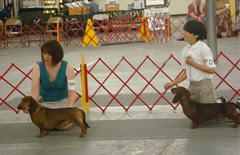 family show
Originally uploaded by Teckelcar
Jake was a bit overwhelmed at first. He was standing just outside the ring, unsure about what to do. I had to call him in the ring and then he snapped out of his fog.

Both dogs were a bit on the exuberant side. We got them to stand nicely for the judge, but it wasn't enough. The miniature won the points and not us. I got the impression that this particular judge favored push button dogs. He liked little robots going around in well behaved circles. Happy goof balls need not apply. I wasn't too surprised, as I had been warned before hand that this particular judge could be interesting. I won't waste my time or my money with him again.
Posted by Sarah at 9:48 PM