Cake and a Spare 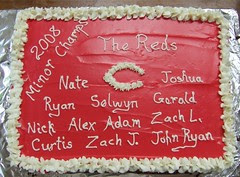 red cake
Originally uploaded by Teckelcar
As y'all know by now I like to bake. When ever a cake is needed (and even when it isn't) I'll make one.

So for me the end of any sports season means it is time to get baking.

Yesterday Nate's team had its end of the season party. It was a nice low key affair held at my neighborhoods pool. Mind you the weather did get a bit dicey a first. There was a rumble of thunder just before hand that necessitated the closing of the pool for an hour. Normally we would have been asked to clear out, but because I had pitched a tent out back in the grassy area we were allowed to stay. After a big gust of wind that almost blew away the tent and a brief sun shower, the skies cleared and we were able to enjoy our party. A very nice side effect of the weather was that swim team practice ended early and the rest of the pool cleared out. We ended up having a private pool party. 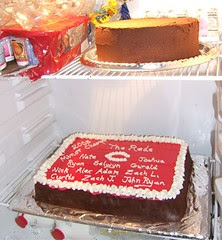 back up cake
Originally uploaded by Teckelcar
The cake I made for the party was a big hit with the team. Not only was it delicious, but the boys loved having their names on top. After many, many end of season parties I have learned that nothing makes a child happier than having his or her name written on a cake. I knew they would like the cake, but I was a wee bit concerned about quantity. The big sheet cake I made should be enough, however I decided to hedge my bet. I made an emergency back up cake. If we ran out of the big cake I could pull out the spare. It was a snap to make and I was planning on making something for my dog meeting on Tuesday (it was a member's birthday last weekend and I thought it would be a nice thing to do). Either way the cake would be eaten.

So that is why there were two cakes in the garage fridge.
Posted by Sarah at 11:52 PM