Artist of the Week: War and Peace 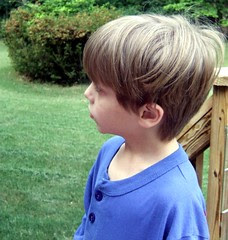 Max
Originally uploaded by Teckelcar
Max is a complex little guy. He gives the best hugs and loves to tell jokes. Mind you the jokes more often than not miss the mark, but when they hit the mark they are genuinely funny. He is my little snuggle bunny, but don't call him that. He is just Max and he gets very mad if you add anything to his name.

When properly motivated he produces some very fine art.

On the last day of school he brought home a large tube of rolled up art projects. One of them was a collage inspired by Monet's Water Lily Pond and Bridge. I think it is a lovely collage. When I asked him about it he told me that when he made it he organized the lilies like battleships. In fact, he even shaped the tissue paper to resemble ships, but they all got squashed down when he brought the picture home.

waterlillies
Originally uploaded by Teckelcar
Which brings me to another part of Max. Like many little boys he is fascinated by all things associated with war. He loved watching the history channel with his brothers before Comcast took it away. I'll often find my three boys piled up together looking at the latest World War II book we have brought home from the library.

This fascination is evident in his art. The pictures that he draws at home on whatever pieces of paper he get his hands on are inevitable some sort of battle. Originally this drawings were inspired by Star Wars, now they feature planes and tanks. This particular drawing was made at the ball field during either Jake or Nate's last game. 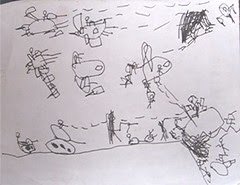 battle
Originally uploaded by Teckelcar
It is a pretty classic example of his work. The people are stick figures, but the vehicles are fairly detailed. To really appreciate his work you need to present when he draws. He often will give a running narration of the battle as he sets it to paper. Planes are drawn and then blown up. Tanks are shown moving from one place to another. It is all rather complicated, just like Max.
Posted by Sarah at 9:45 PM