Artist of the Week: 3D 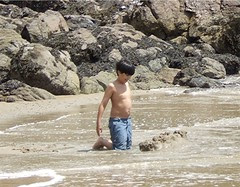 Jacob
Originally uploaded by Teckelcar
This week's artist is Jake, or rather Jacob as he prefers to be called at school. Of course school was the last thing on his mind when this picture was taken. He is instead having fun up at the ancestral home by the beach.

All four spent hours messing about on the beach. Jacob spent his time building sand castles and walls and delighted in watching the tide come it. He would hold back the waves as long as he could, but he knew that in the end the sea always wins.

Anyway, at the end of the last school year his math class made some three dimensional folded paper shapes.

3D sculpture
Originally uploaded by Teckelcar
The remarkably survived the ride home and have been knocking about the house. I like the colors he picked and I'm amazed at how they were made. I also liked that Jacob made one just for his sister. He thought Rebecca would enjoy having one of her own. He can be such a thoughtful and kind hearted boy. Rebecca's special one has since gone missing, but I remember what he did.
Posted by Sarah at 11:57 PM