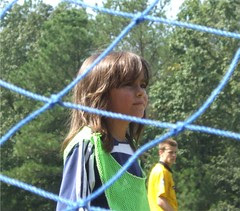 In goal
Originally uploaded by Teckelcar
This weekend marked the end of our free time and the start of sports. Mind you the kids have been going to practice for a couple of weeks, but on Saturday they had their first official games of the season.

Max and Rebecca are both playing soccer with our local recreational league. For the first time ever, they are on separate times, which is both good and bad. Bad because their practices are on different days, good because they are not being lumped together. Max's team was first up and did a bang up job at their first game. They completely overwhelmed the other team. Rebecca's team did well in the extreme heat. Both teams were quite ragged by the end and a tie was a rasonable result. 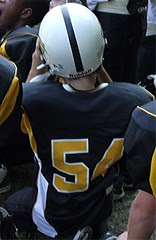 Postgame Nate
Originally uploaded by Teckelcar
Over on the gridiron, Nate played in his first, non-instructional game. I didn't get to see it, being over in soccer world, but Larry did take a bunch a pictures and told me all about it afterwards. Nate got a lot of playing time. One of the first string kids was sick and Nate got put in his place. He did a great job as tight end and really impressed the coaches.

I found out about the coaches on Monday from our dentist. I had a teeth cleaning and my dentist, who is also one of Nate's coaches, chatted about Nate. I found out that they were all amazed at how quickly Nate was picking up the nuances of the game.

As for Jake, he got to stay home in the 90+ degree weather. He had just made the middle school soccer team on Friday and will be having his first game this week. He was very excited to have made the cut and he looks forward to practices and his first game of the season Thursday.