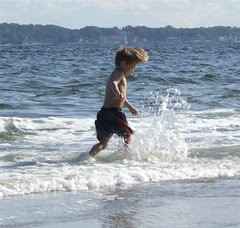 Max
Originally uploaded by Teckelcar
This week's artist is Max. I captured this photo during our trip up north. It's a dynamic shot with the splash of the water and the swinging about of his hair, very appropriate for such a dynamo of a guy.

He is an active little guy with all the typical fascinations of a little boy. Currently all three of my boys are interested in all things pertaining to World War II. They have checked out stacks of books and pored pictures of airplanes and guns. Even Rebecca has been affected and drew an absolutely hilarious picture of army pigs. Anyway this brings me to this week's art.

Max got to decorate some cookies today. They were sugar cookies in various Halloween themed shapes, bats, cats ghosts and pumpkins. He had three different frostings to choose from (vanilla, chocolate and orange tinted vanilla) and a rainbow of writing gel tubes. 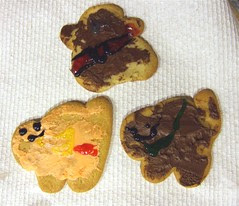 cookies
Originally uploaded by Teckelcar
As for the decorated cookies, well Max did them in his own fashion.

White frosting made the ghost cookies too scary, so they got chocolate instead. He then carefully drew a face and a belt. Made you this wasn't an ordinary belt, but one that would blow up the ghost in 100 days. The two cats below the ghost appear at first rather ordinary, but they aren't. The orange kitty has a miniature bazooka and the brown cat has a rifle.

The best cookie, sadly, has already been eaten. It was a bat holding a balloon that Max said had the phrase "I love fruit" written on it.

The cookie and its decorations were delicious.
Posted by Sarah at 10:46 PM