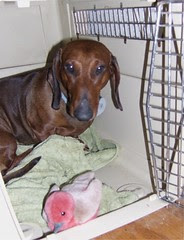 Dell
Originally uploaded by Teckelcar
Dell is a very silly and very affectionate dog, but he can also be very destructive. The kids have (mostly) learned not leave stuffed animals on the floor. John seems to ignore the toys, but Dell still picks them up, carries them about and then chews off the ears, nose and/ or tail of whatever stuffed animal he happens upon.

That being said, sometimes Dell just wants a lovie in his crate at night. He'll snag a toy and bring it into his crate and sleep with it. The toy will be unharmed when we finally notice it inside Dell's crate. I'm tempted to get him his own stuffed animal, but I'm fairly certain it will get destroyed in short order.

The funniest part about the lovies is John. It seems that John does not approve of Dell's antics and will remove the toy from Dell's crate the first chance he gets. And that is how we often find out about Dell's toy of the moment. After the dogs crates are opened Dell bursts out in a rush of happy energy. John, however, waits for Dell to go around the corner before he ducks into Dell's crate and removes the toy. John only does this if it is not a dog toy. Bones and balls are left to languish in the crates, but not the stufed animals that belong to the kids.
Posted by Sarah at 11:10 PM